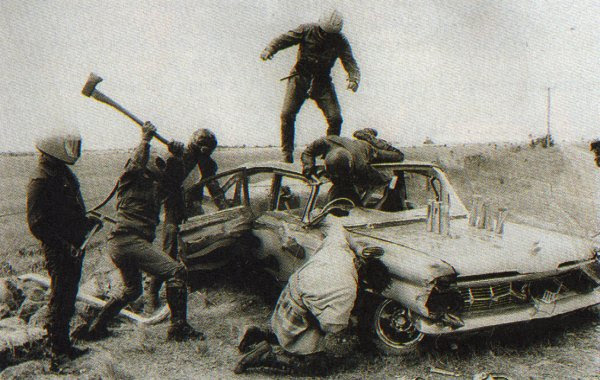 Each Tuesday, rather than a POSSIBLY IRRITATING ESSAY, I'd like to both challenge you and lend a helping hand. I generate more speculative and teen story ideas than I can ever use. My family rolls its collective eyes when I say, "Hang on a second! I just have to write down this idea..." Here, I'll include the initial inspiration (quote, website, podcast, etc) and then a thought or two that came to mind. These will simply be seeds -- plant, nurture, fertilize, chemically treat, irradiate, test or stress them as you see fit. I only ask if you let me know if anything comes of them.


SF Trope: Post-cataclysmic rag-tag armies struggle to kick [some bad guy] out of the good ol' US of A
Current Event: http://blog.foreignpolicy.com/posts/2012/11/21/could_north_koreans_invade_america

Salvador Cadenas de la Parras screamed, “¡joda la tierra!”; he also cursed the sky and the very air he breathed. He threw his hat over the cliff and cursed an invisible America two thousand kilometers to the north.

Yomery Kauam smiled, shook her head then laughed, saying, “If only you’d have expressed you passion to the Commander in Chief, you’d be on Haitian and Dominican soil at this moment, smashing through that pestilential wasteland on your way to Florida. Instead, you’re here, throwing your hat over a cliff into the bright morning sun.”

Sal spun around, cursed her, fixing her with as fierce a glare as he could. “I wanted to be there!”

Yomery shook her head, “You didn’t want to be there – you wanted to be a hero with El Presidente’s medallion on your chest and women on your arms.” She gestured to the far-away target. “Invading America today is nothing at all like invading it forty years ago!”
“It’s the same!”
Yomery headed back down the hill. Sal ran after her, grabbed her shoulder. She grabbed his hand, stopped and let gravity and mass work together to flip him over her shoulder. Keep her hand firmly on his wrist, she pulled him back toward herself until he came to a sudden, breathless stop on his back, at her feet. She leaned over, kissed his nose and said, “Let’s talk when you calm down, OK?”
She scramble down the trail, listening carefully to make sure she hadn’t broken anything important on Sal. When she heard him groan and scramble to his feet, she headed to the monitor bunker they’d been sharing since Venezuela had launched its preemptive attack against what had formerly been the glorious US of A. She’d been born there in the Decadent Decade just before the Fizzle. The one-time world power was now reduced to planning invasions of one-time failed countries like Venezuela...
Sal limped up beside her and said, “¿Por qué hizo usted esto?”
She replied in unaccented American English, “Because you tried to bully me.”
“I...I...I...”
“You should practice your English, Sal. We may not be in on the real invasion, but the occupation of America should keep us busy for…oh, the next decade.”
“America might...”
“America’s not going to do anything except surrender.”
He stared at her and said, “Haven’t you ever watched the Mad Max movies?”
“I don’t see what some ancient, flat, American movie...”
“It has everything to do with this whole invasion! We may be strong; we may be brave, but the Americans have corazón profundo.”
“What’s that supposed to mean?”
“They have a deep spirit when they’re forced into a corner.”
She pursed her lips, glanced north in the direction of the legendary “land of the free and the home of the brave” and said, “That may be true, but I’ve heard that El Presidente has a surprise up his sleeve for the Americans.” Sal ran up behind her, reached to grab her arm then jerked his hand back. Without turning around, she said, “Let’s just say that Americans may have a history of resisting oppressors – Brazilians have a history of subverting our oppressors.”
References: http://www.mrqe.com/lists/post-apocalyptic-movies/cinemas-best-to-worst-postapocalyptic-movies
Names: ♀ Venezuela (both); ♂  Venezuela (both)
Image: http://www.madmaxmovies.com/mad-max/mad-max-cars/chevy-impala/ImpalaAttack.jpg
Posted by GuyStewart at 7:13 PM