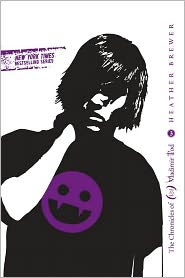 Each Tuesday, rather than a POSSIBLY IRRITATING ESSAY, I'd like to both challenge you and lend a helping hand. I generate more speculative and teen story ideas than I can ever use. My family rolls its collective eyes when I say, "Hang on a second! I just have to write down this idea..." Here, I'll include the initial inspiration (quote, website, podcast, etc) and then a thought or two that came to mind. These will simply be seeds -- plant, nurture, fertilize, chemically treat, irradiate, test or stress them as you see fit. I only ask if you let me know if anything comes of them.
H Trope: immortality
Current Event: http://en.wikipedia.org/wiki/Immortal_DNA_strand_hypothesis
http://www.ncbi.nlm.nih.gov/pmc/articles/PMC3109559/
While the Wikipedia entry explaining the Immortal DNA strand isn’t exactly a current event, the second entry IS and though it is a medical paper and written in medical language, it happens to be significant to the life of our family.
To make this understandable to lay people, I’d like to use those worn-out tropes of horror: vampires.
Let’s just say that the vampire DNA strand is immortal, but because so many vampires were killed in the 19th and early 20th century by various vampire slayers such as Koshiko Kamiyama, John Averill, Twelve String Digby (http://www.fvza.org/tophunters.html), Van Helsing and Buffy, it has become widely spread and doesn’t produce vampires any more.
It’s lengendarily reported that the vampire slayings were in response to an outbreak of vampires in the 17th and 18th Centuries (http://www.independent.co.uk/news/world/europe/the-real-vampire-slayers-397874.html).
It is the 21st Century now and people travel everywhere all the time. A chance college meeting leads to romance for a couple with old, Eastern European roots – Curtis Allen is the result and he discovers his vampiric leanings not long after his mom is transferred to the 3M headquarters in Minneapolis. He attends a prestigious private high school…but the story begins when his dad has to tell him about the birds, the bees and bloodlust…
Image: http://img2.imagesbn.com/images/99630000/99631950.JPG
Posted by GuyStewart at 6:09 AM