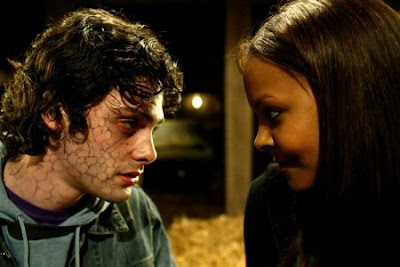 Each Tuesday, rather than a POSSIBLY IRRITATING ESSAY, I'd like to both challenge you and lend a helping hand. I generate more speculative and teen story ideas than I can ever use. My family rolls its collective eyes when I say, "Hang on a second! I just have to write down this idea..." Here, I'll include the initial inspiration (quote, website, podcast, etc) and then a thought or two that came to mind. These will simply be seeds -- plant, nurture, fertilize, chemically treat, irradiate, test or stress them as you see fit. I only ask if you let me know if anything comes of them.
SF Trope: post-apocalyptic world
Current Event: http://blogs.cdc.gov/publichealthmatters/2011/05/preparedness-101-zombie-apocalypse/
I KNOW I’ve done zombies before (http://faithandsciencefiction.blogspot.com/2011/08/ideas-on-tuesdays-26-zombie-researcher.html and http://faithandsciencefiction.blogspot.com/2011/06/ideas-on-tuesday-18-stalking-abandoned.html) but they were from different points of view than this. This is a warning from the Center for Disease Control in Atlanta, Georgia. Granted, it’s a bit tongue in cheek and the intent is to bring up the necessity for people to prepare for ANY kind of disaster, but it gave me an idea…
The CDC urges you to become a member of the Zombie Task Force.
What if the “joke” has been perpetrated by that once-in-a-millennium occurrence, a zombie CARRIER (no, I don’t mean a semi-trailer designed to transport zombies stacked like cordwood, though that’s an interesting image…) – I mean someone who is only a partial zombie. They don’t walk around with outstretched arms, they don’t thump around at the speed of a tumbling tumbleweed. In fact, a zombie carrier is someone who, like Typhoid Mary spread the zombie disease without themselves being a zombie (“Individuals can develop typhoid fever after ingesting food or water contaminated during handling by a human carrier. The human carrier is usually a healthy person who has survived a previous episode of typhoid fever yet who continues to shed the associated bacteria, Salmonella typhi, in feces and urine.” From Wikipedia, Typhoid Mary)
So, a high school senior who is virtually invisible at her school, is the only child of a couple who have been doing research on the reanimation of dead human tissue. They live far on the edge of town and she has been driving herself to school ever since she got her license. She overhears them talking one night and figures out (finally) that they are zombie carriers.
In order to find out if she is, she thinks about a particular clique of girls who like to tease her and this guy who she likes but who mocks her and decides to…
Image: http://1.bp.blogspot.com/_MFslwcqLKIE/Sme8ud9e-tI/AAAAAAAAAmk/zA79yKs-qz8/s400/boy_eats_girl_8.jpg
Posted by GuyStewart at 6:16 AM